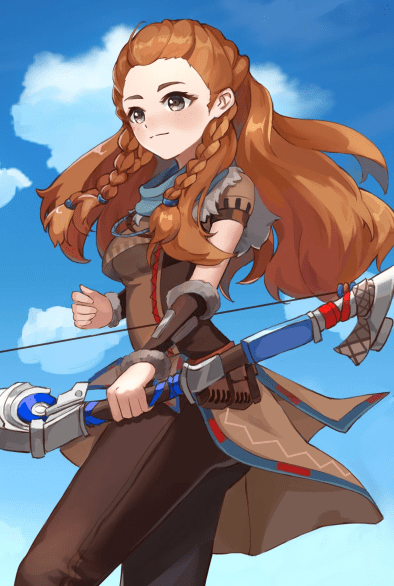 This is the in-depth Aloy guide, courtesy of Aloy Mains and KQM. In this guide, we’ll cover Aloy’s Talents and builds, as well as the best artifact sets and weapon rankings for both a Quickswap/Burst-DPS and a support playstyle.

‘An agile hunter from the Nora Tribe. With bow in hand, she is always ready to protect the innocent.’

Explanation of the terms used (only applicable to this guide)

Aloy is a free event 5-star Cryo bow character who utilizes her Skill to infuse her Normal Attacks with Cryo, and deals quick AoE damage with her Burst. The low CD and energy requirement on her Burst make her a great quickswap unit, while the particle generation on her Skill can allow her to battery other Cryo units.

However, Aloy does not have any available Constellations, which means her performance can only be increased through levels, artifacts, weapons, and Talents. In addition, the long CD on her Skill gives poor uptime on Cryo infusion, and can result in energy problems unless an additional source of particles is provided.

POV: You now own Aloy.

‘The world always seems quieter when it snows’

Is Aloy a good unit?

Aloy is a flexible unit that can fit into many teams. Her damage is decent, especially when played as a Burst-DPS. However, she is rarely the best choice for a team.

What is Aloy’s best role?

Aloy’s best role is as a quickswap Burst-DPS who swaps in, casts her skills and attacks to do damage briefly, and swaps out. She can also serve well as a support.

Is Aloy a good main DPS?

Not really. While she can work as a main DPS, her lackluster Normal Attack multipliers and difficulty obtaining Coil stacks on her own makes her unable to match up to other units in the same role. She’s better played as a Quickswap DPS, where she uses her skills and Normal Attacks to quickly do damage before swapping off.

Is Aloy a bad unit?

For an entirely free character, Aloy is not a bad unit. She has multiple uses, and while she is generally not the best option for them, her performance is not necessarily poor either.

Incorrect. While all three of Aloy, Yoimiya, and Ayaka have a mechanic within their kit that allows them to infuse their Normal Attacks, each of their playstyles are fundamentally different:

Partially, yes. A main DPS or Burst-DPS Aloy will generally need a lot of investment to see good results due to a number of factors (no Constellations, fairly average scalings, etc.), although the same can be said for the majority of existing characters. However, a support Aloy is relatively cheap and easy to build, especially since her damage in that role is not important.

‘This world has a past full of secrets, just like my world. I’ll uncover it all, if I have enough time.’

Aloy’s Normal and Charged Attacks are standard for those of a bow character. She has a 4-hit Normal Attack string, with the first hit being a multi-hit and the rest single. Her Charged Attack will deal Cryo damage when fully charged.

Her Normal and Charged Attacks all have fairly average scalings. This Talent will generally only be used as a main DPS.

Aloy throws a Freeze Bomb in the targeted direction that explodes on impact and then splits into 6 Chillwater Bomblets that either explode on contact with an enemy or after a short delay. All explosions deal Cryo damage.

When the Freeze Bomb or Bomblets hit opponents, they will deal Cryo damage, reduce the enemy’s Attack, and give Aloy one Coil stack. Aloy can gain one Coil stack every 0.1 seconds. These stacks last for 30 seconds after Aloy leaves the field. Aloy can also receive stacks while not on the field. Every Coil stack increases Aloy’s Normal Attack damage. When Aloy has 4 Coil stacks, all stacks are cleared and she will enter the Rushing Ice state. This state, denoted by a white mist around the active character, further increases Aloy’s Normal Attack damage and converts it to Cryo damage for 10 seconds. Even if another character has the white mist effect, their damage is not buffed or altered, the particle effect is only there to make the player aware that Rushing Ice is active for Aloy. While in this state, Aloy cannot receive additional Coil stacks. This skill has a cooldown of 20 seconds. Rushing Ice state does not end when you swap off Aloy within its duration.

Aloy throws a power cell filled with Cryo at the nearest enemy, then detonates it with an arrow, dealing AOE Cryo damage. This Burst is similar to Childe’s bow Burst in targeting, but it has a slightly larger AOE. Aloy’s Burst costs 40 energy and has a cooldown of 12 seconds.

This is the bread and butter of Aloy’s kit, and it’s what makes her a decent Burst-DPS.

It’s a nice, straightforward buff to Aloy and her teammates that helps them hit a bit harder.

When Aloy is in the Rushing Ice state conferred by Frozen Wilds, her Cryo DMG Bonus increases by 3.5% every second. A maximum Cryo DMG bonus of 35% can be gained in this way.

With this Talent, Quickswap DPS Aloy should burst after a few seconds of the Rushing Ice state duration, to make full use of the Cryo DMG Bonus%. As for Burst-DPS Aloy, although she does not reliably trigger Rushing Ice, it may occasionally happen while she is off-field, in which case she would benefit from this Passive.

Utility Passive: Easy Does It

When Aloy is in the party, animals who drop Fowl, Raw Meat or Chilled Meat will not be startled when approached.

An excellent Talent for hunting—however, once you kill one animal or get too close, the others will still run.

‘Let’s get going. There are people who need our help.’

About Coil Stacks and DPS

Coil stacks are an integral part of Aloy’s kit as a main DPS; she needs them to get her Cryo infusion. Unfortunately, various factors in how they work make it a nuisance to accumulate the necessary number of stacks. For example, enemies may be too spread out or move out of range of the bomblets. This makes it necessary to use Anemo units to pull her bomblets into colliding with enemies for consistent infusion, but even this method can face issues because of the ICD on gaining Coil stacks. Add in the 20 second Skill cooldown and Aloy can really suffer in trying to get Coil stacks. There are ways to remedy this that we’ll go into in the next section, but generally, this Talent is a big reason why Aloy is better off as a Burst-DPS or a Quickswap DPS. Pray that one of her Constellations makes it easier to attain stacks, if she ever gets them.

How to Consistently Get Coil Stacks

Aloy as a main DPS requires an Anemo unit to consistently get sufficient Coil stacks. The following skills in particular can help:

Venti and Viridescent Hunt’s passive do not suck or move bombs.

See Prévisible’s video about common ways to get 4 stacks for guidance.

Incorrect way to get stacks

The best way to get stacks more consistently is with the help of an Anemo unit, as stated above. However, many people recommend using Sacrificial Bow to cancel her skill cooldown, allowing her to recast her Skill for the chance to gain more stacks.

This method is reliant on further layers of probability, making it even more inconsistent. Furthermore, Sacrificial Bow is a poor option for Aloy’s damage as a damage dealer, and is therefore not recommended to be used on Aloy when she isn’t a support.

‘Aloy here. I don’t know this world, but my arrows are sharp and my bow’s ready. If your party needs help, I’ll do what I can.’

Aloy’s Burst/Quickswap build focuses on maximizing her skills’ damage. Aloy will require 140–165 ER% to use her Burst off cooldown.

Support Aloy revolves around batterying Cryo teammates such as Ayaka while buffing them. Her personal damage is merely a bonus, and should not be prioritized over maximizing utility.

‘Everything I do is in the service of life, not death. That’s why I’m here with you’ – Aloy

A Burst-DPS Aloy can generally fit in most teams as a quick fill in the flex slot. However, her relatively long Elemental Skill cooldown makes her suboptimal for some teams, such as Superconduct teams and certain Melt teams (for example Hu Tao and Bennett teams where they are Melting). If run in a Superconduct team, ensure there is a second Cryo unit such as Rosaria or Kaeya so they can cover with their Cryo application when Aloy’s Skill is down. Refer to your DPS character’s guide for more synergies.

Burst-DPS Aloy can replace Diona in Freeze teams as a more damaging option, at the cost of the increased comfort that Diona’s shielding, healing, and stamina reduction provide.

This team has Ganyu or Ayaka as a Cryo main DPS (see character synergies for more info), along with a Hydro and Anemo unit. Support Aloy batteries her Cryo teammate while buffing them with 4 set Noblesse Oblige. Aloy also forms the second half of Cryo resonance, which is essential to this team thanks to its Freeze playstyle enabling 4 set Blizzard Strayer’s CRIT Rate increase.

For Eula teams, Aloy is subpar despite being a good battery for Cryo carries, because she only provides particles and 4 set Noblesse. Meanwhile, Diona can additionally heal and shield Eula during her Burst’s duration, and Rosaria can buff Eula by providing CRIT Rate for the team. As such, Aloy isn’t recommended as a Eula battery.

Cryo Resonance is a must in this team for the free CRIT Rate. An Anemo unit must also be in the team to shred enemy resistances with 4 set Viridescent Venerer and pull in Aloy’s bombs so she can more easily obtain Coil stacks. Be wise with who you give TToDS buff to if you’re running Mona, Kokomi, Barbara or Sucrose. If running Xingqiu or Mona as the Hydro unit, make sure they have sufficient ER for consistent Burst uptime. Use your Cryo battery or Charged Attack on Aloy to have a Cryo aura to Swirl for the 4 set VV effect before using Aloy for damage. When Skills are down, focus on getting them back. Use your Cryo battery to funnel particles to Aloy.

The flex slot can be a healer, Anemo support, more off-field damage such as Kaeya to boost team damage, or a shielder. Make sure to thoroughly buff Xiangling using Bennett, TToDS, VV resistance shred or other buffs before casting her Burst for increased damage. During Burst downtime, cast Skills and battery units as necessary to regain everyone’s Bursts. Xiangling should be batteried with the help of Bennett’s Tap Skill. Please be careful if using a Hydro unit since it can mess up Aloy Melts.

I hope this guide was of use! If you have feedback to give, or questions to ask, contact me on Discord (Raven#9205). This guide will be updated regularly to keep it up to date.

‘I’ll do whatever it takes to finish this with you. I won’t hesitate. I won’t falter.’ 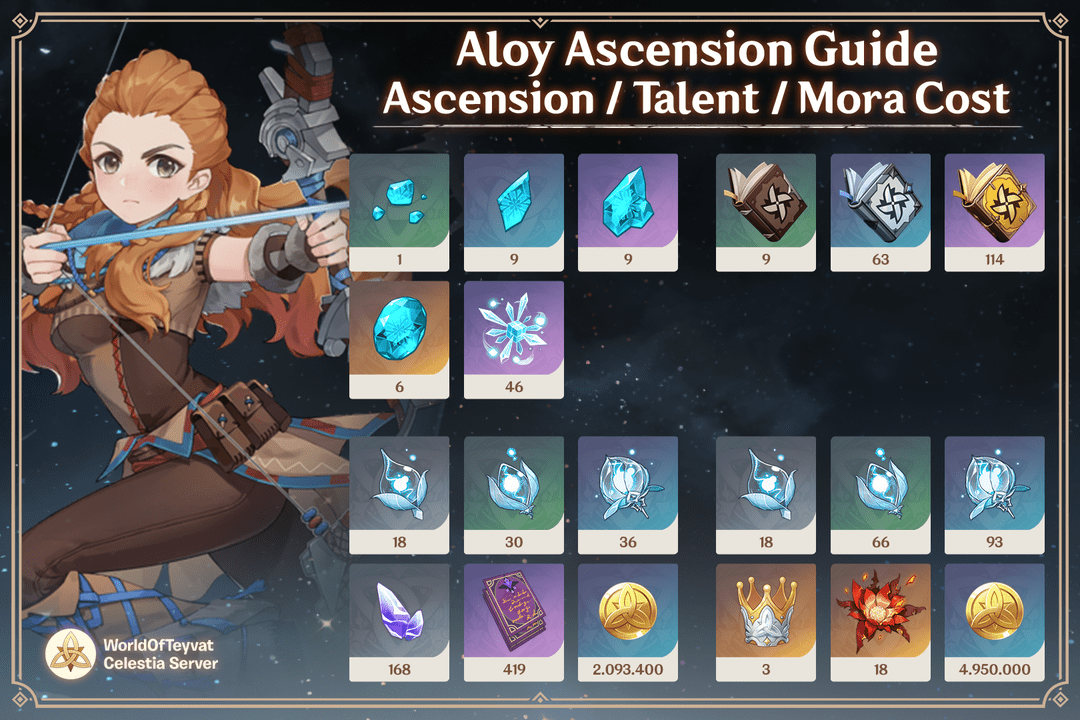 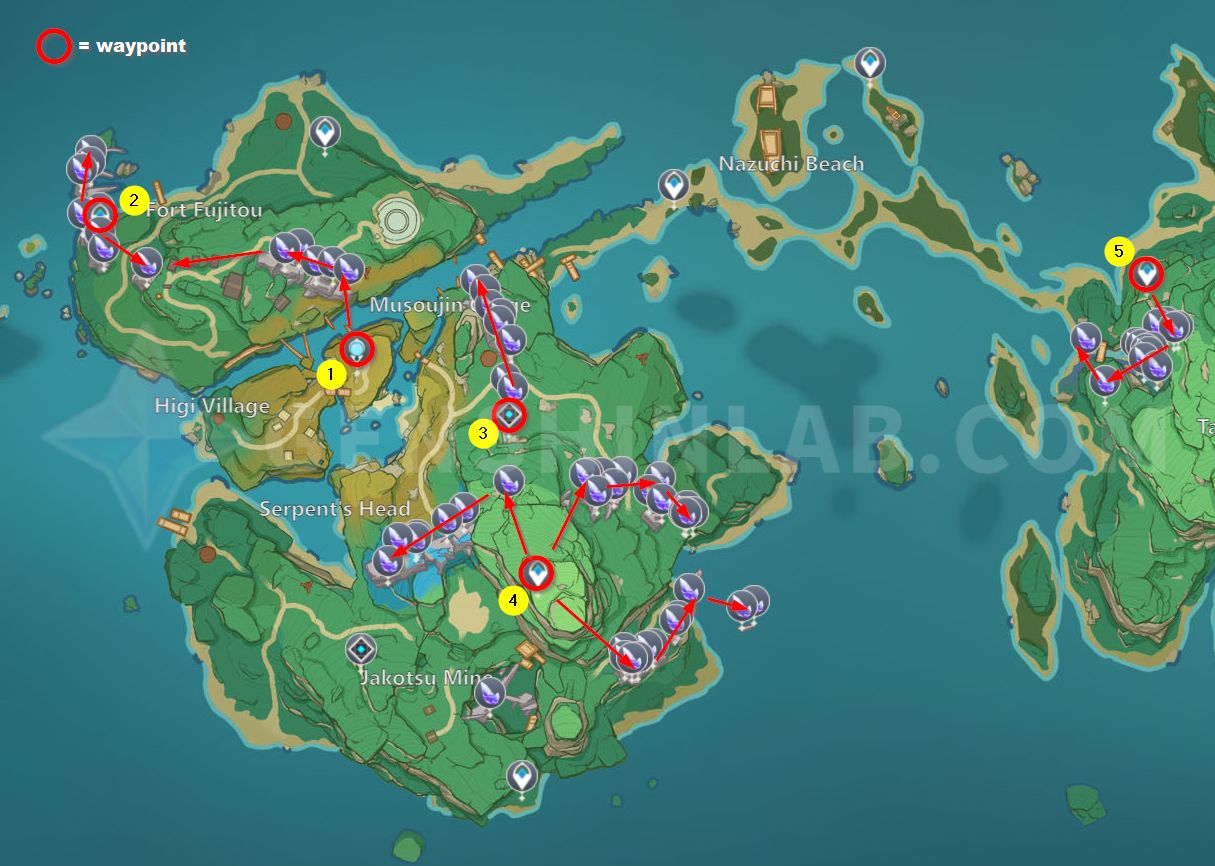 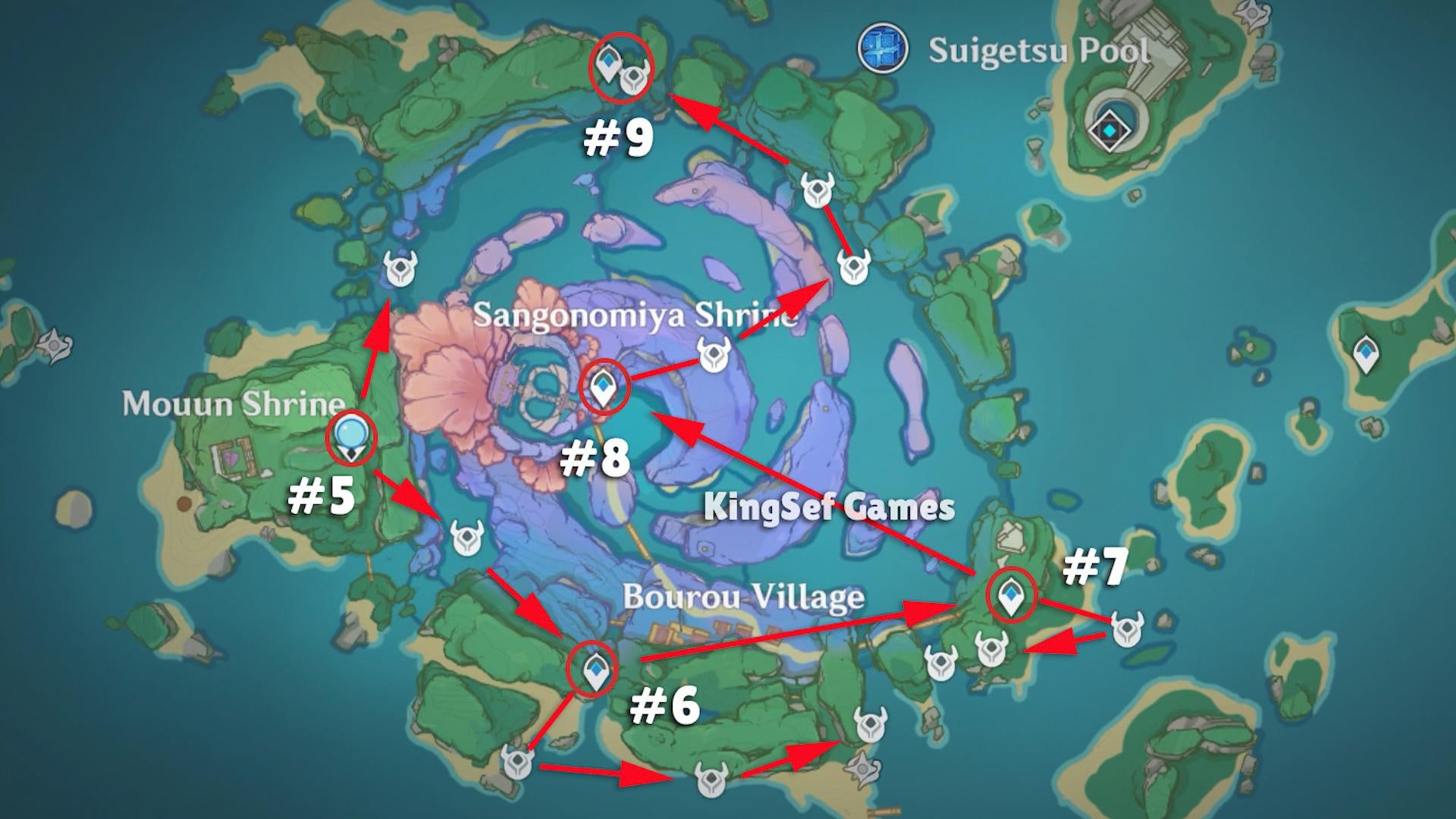 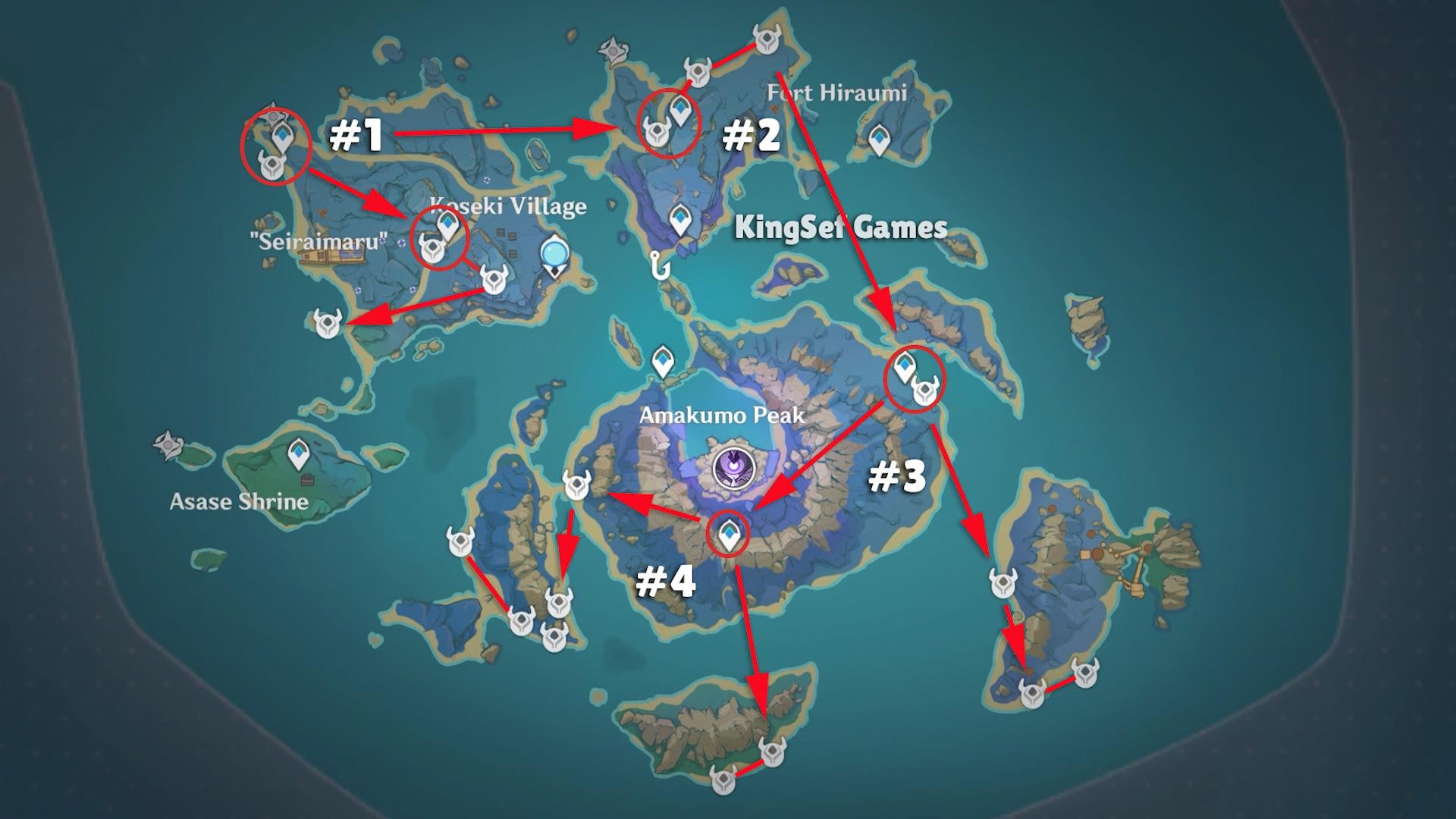 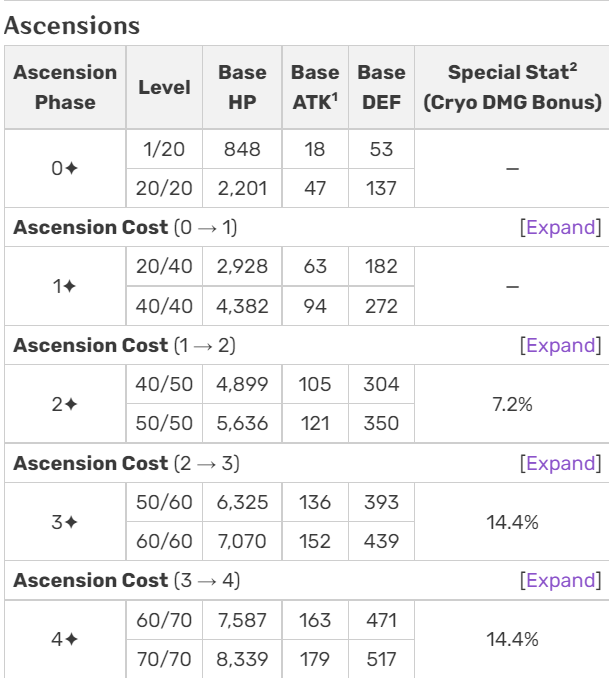 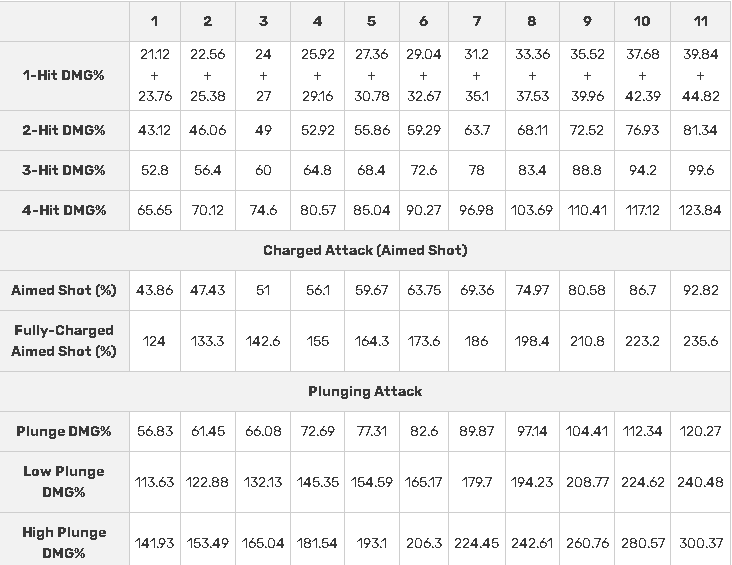 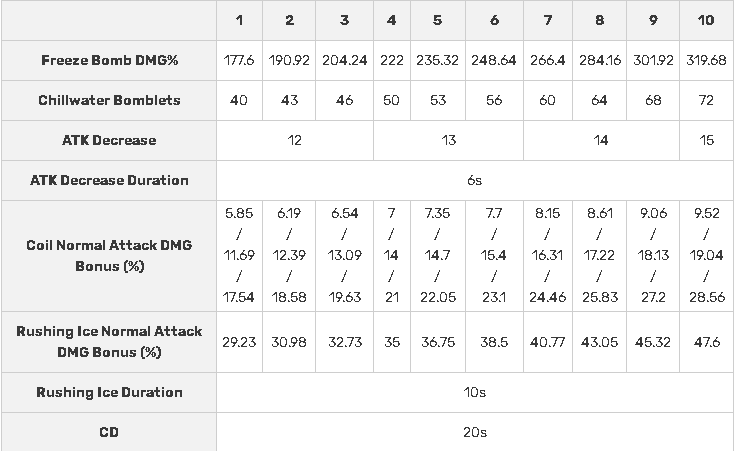 Links used to make this guide:

Credits go to the following people from Aloy Mains and KeqingMains for their contributions to the guide. This guide wouldn’t be here without them! – Raven

…and everyone in KeqingMains and Aloy Mains who provided their support!

Art
All art in this guide has been added with the explicit permission of the artists. Please check the links underneath the art for credits. If you like their art, show them some love!

© All rights reserved by Hoyoverse. Other properties belong to their respective owners.